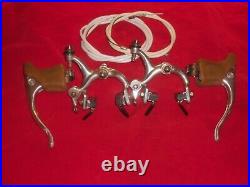 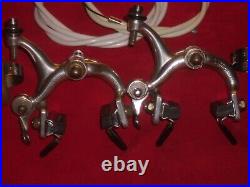 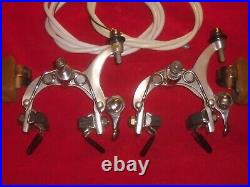 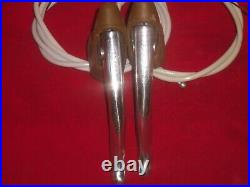 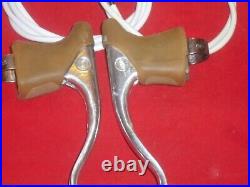 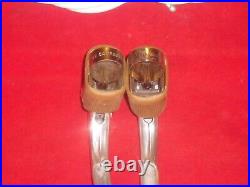 This listing is for Another Vintage Campagnolo Nuovo Record Allen Key Mount, Short Reach Brake Set I Was Able To Assemble From Team Spare Parts. The Hoods Are World Logo Gum, NOS, Soft And Supple Just Like When They Left The Factory. The Cables Are NOS Genuine Campy. They Are Corrosion Free. The Levers Are Scratch Free The one Lever is A Little Stiff But Will free up once mounted. They Are All In Great Lightly Used Or Almost New Condition. So Look At My Other Listings. My Teams Were Always Sponsored By Campagnolo and That Is Why I Have So Many Campy Parts, These Brakes Could Have A Little Shop Were As They Have Been In My Team Stock for 40 years. Vintage bicycle parts are exactly that. They are old – whether new or used. Unlike fine wine or cheese, they do not improve with age. Bicycle parts are not stored in climate controlled rooms or vaults. They were never works of art. They were practical, usable items. They can have dust, dirt, bugs, oxidation, etc. If you have any questions, always ask. About Mike Fraysse: 1976 and’84 US Olympic Team Manager and 19-time World and Pan American Championship coach Mike Fraysse has been involved with the sport of cycling all his life. A fourth-generation cyclist whose grandfather founded what is today the United States Cycling Federation, Fraysse was a world-class racer with a National Championship title before moving into the coaching role. In 1979 he brought Polish coach Eddie “B” Borysewicz over from the Eastern Bloc, and together the two went about revolutionizing the sport of cycling in America. Fraysse has had a hand in the development of such riders as Greg Lemond, Ron Kiefel, Alexi Grewal, Andy Hampsten, Davis Phinney, Betsy Davis, Connie Carpenter, Rebecca Twigg, Beth Heiden, Eric Heiden, Lance Armstrong, and Steve Woznick, to name just a few. For his contributions to the sport, in 1998 Fraysse became one of the only Americans ever to receive the prestigious Merit Award from the UCI, cycling’s world governing body, and later that same year he was inducted into the US Bicycling Hall of Fame. About Mike Fraysse Sports: Since 1994, Fraysse has operated Mike Fraysse Sports, LLC. A cycling- and triathlon-specific training center located in the foothills of New York’s Catskill Mountains just 2 hours from New York City and 3 hours from Philadelphia. Situated on 28 secluded acres, the Sports Resort features a Victorian Mansion where 4-course gourmet meals are served three times daily, guest accomodations for visitors and athletes each with private bath, TV, gym, computrainer and roller rooms, a full-size swimming pool, deck, and volleyball court. Camps are conducted throughout the year for a wide range of abilities–from beginners and recreational riders all the way up to elite national-caliber professionals. In addition to the Sports Resort, Mike Fraysse Sports, LLC. Also conducts a hugely popular training camp in Argentina each February and March for cyclists and triathletes of all abilities. Structured as a “training camp – vacation, ” attendees enjoy unmatched coaching at world-class facilities during the southern hemisphere’s summer in one of the most beautiful vacation spots in the world, and often bring their non-cycling family members along for the post-training sight-seeing, shopping, amazing food, and summer fun all during the most frigid part of the northern hemisphere’s winter. This item is in the category “Sporting Goods\Cycling\Vintage Cycling\Vintage Bicycle Parts”. The seller is “mike_fraysse” and is located in this country: US. This item can be shipped worldwide.